Tip of the Week: You are sitting quietly admiring your very nice hand when RHO opens 3S!How annoying! The idea of the preempt is to make life difficult and to make you guess, to get good results your partnership must have a system in place that you have both studied, discussed and agreed upon. More...

2 is leading a singleton

3 is leading top of a sequence

4 has the ace and fears declarer has the king

Katie Rose Charity Day: Our first charity day for 2022 was held today with all table fees and raffle monies going towards the Katie Rose Hospice. Representative Carol Raye was on hand to give a short presentation and to draw the raffles. A big thank you to all members for their generosity, special thank you to Michelle for putting together the donations into worthy raffle prizes and to Ted and Gilly for providing our delicious afternoon tea. At this stage we have raised over $2000. [posted Thu 5-May-22]

Members Profile : John Fields: So much we didn't know about John! What an interesting story and amazing life, well worth the read. Thank you Susie for this well written article. See more... [posted Tue 26-Apr-22] 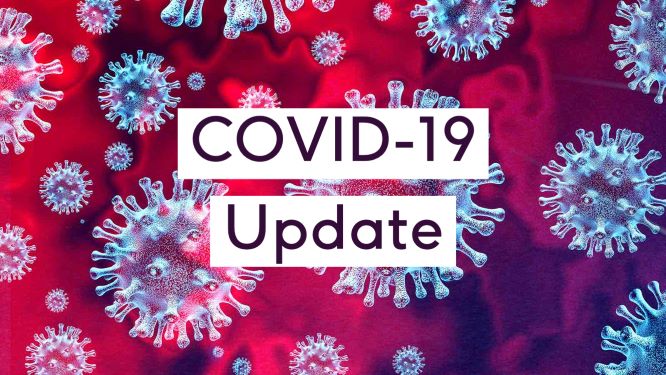 To all our members and visitors. Please do not come to the club if you are feeling unwell with flu like symptoms, even if you have tested negative for Covid 19. We have had an instance where a member was unwell, tested negative, but on a repeated test was positive so we would ask you to stay away from the club until you are well and symptom free regardless of test results. [posted Sat 23-Apr-22] 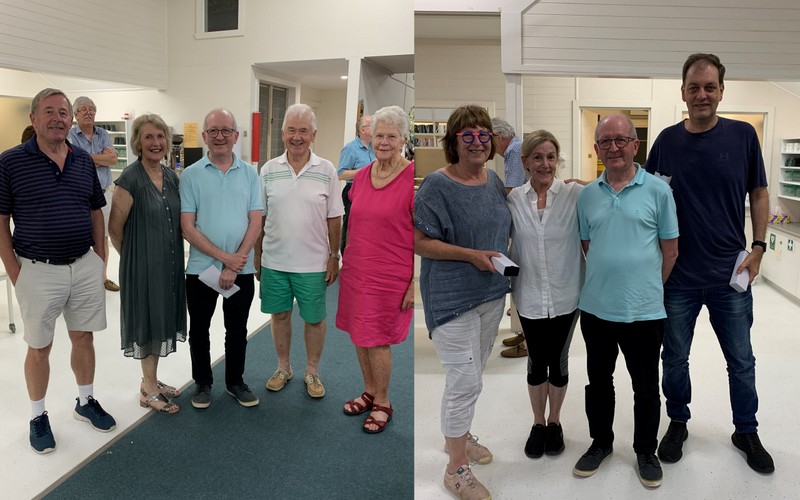 Our club hosted the QBA mixed teams event over the weekend, there were 20 teams represented from SE Queensland in a very strong field . The competition was played as one field but divided into two grades for prize monies. The winners of the A grade were the Ward team, comprising QBA president Richard Ward, Therese Tully, Terry Strong and Jill Magee. Runners up were team Ridley and coming third were the Touton team. In the B grade we had Team Beckett coming out on top with members Ed and Jan Beckett, Pam Hawkins and Russell Greenwood playing his first ever teams event! The Huddart team came second followed by team Stanton. Thank you to director Peter Busch for managing the field so well and special thanks to congress director Pat Lovell for all the last minute rearranging done due to the floods.....thank you to all the people who filled in at the last minute, making up a team and a big thank you to our caddies and kitchen helpers plus bar staff....we couldn't do without you. [posted Sat 5-Mar-22]

Members profiler Susie Osmaston: We are very fortunate to have such a talented writer in Susie as she not only delivers the profiles in a creative, descriptive and amusing way but manages to describe our members so well that we form a vivid impression of their lives. Susie also has her own stories to tell, attached is an article published in Noosa Today a few years ago plus her own profile is contained in one of our newsletters, May 2018. ( see above) Thank you for all your hard work Susie and Happy (significant) Birthday for next month from us all. See more... [posted Sun 6-Feb-22]

Warwick is a member of our management committee and thanks to this very interesting article written by Susie Osmaston we can read what a "jack of all trades" he is. Let us know when your book "Larrikins I Have Known" hits the shelves Warwick! See more... [posted Mon 31-Jan-22]

Our Christmas Party was held on Friday the 10th and we had 32 tables playing bridge plus more members joined us for the party that followed, where we enjoyed a never ending banquet of delicious food thanks to Di Quigley and her team of helpers. Many presentations and thank-yous were announced, starting with our esteemed ex president Ross Gyde being made a Life Member. Special thanks were made to Helen Lawson and Michelle Behrens plus Lizi French who is retiring from her teaching role. The prize winners are too numerous to mention but we congratulate them all ( they are pictured below) Also thank you to our members who dressed for the occasion, particularly "angels" Eugenie and Margo who won best dressed. All the photos can be found under our photos button top right. [posted Fri 10-Dec-21] 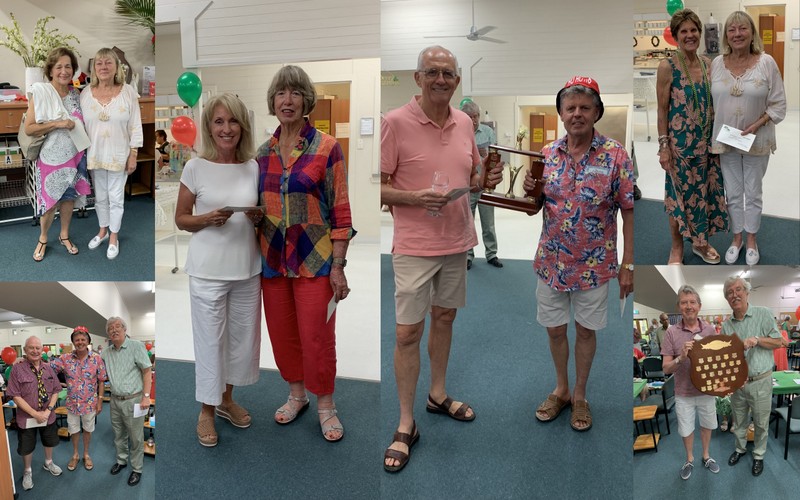 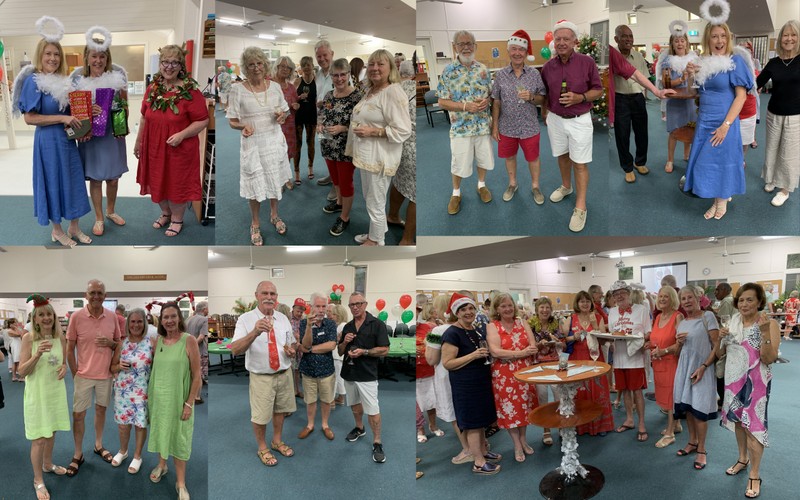 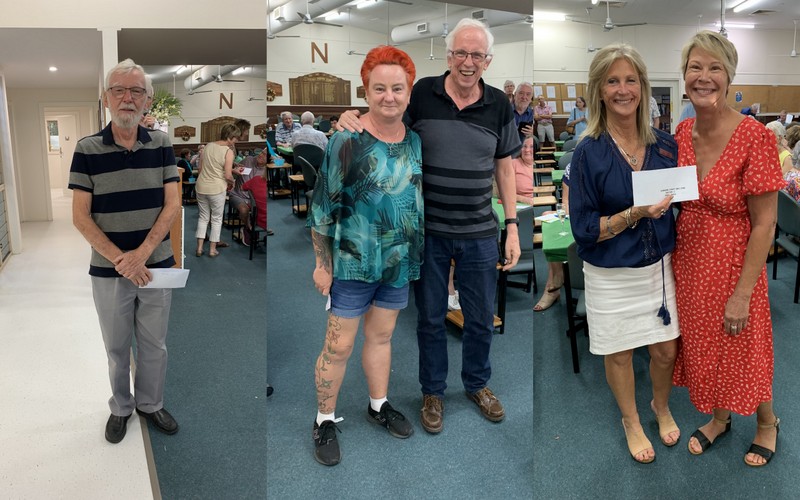 The 2021 Zone Graded Pairs was hosted by our club on the 5th of December. We had 56 pairs competing over 3 grades and the winners of the A grade were Geoff Olsen and Maureen Jakes, with Richard Trollope and David Christian runners up. The B grade was won by Tim Sayer and Sarah Huntington-Wynne, with Peter Hagan and Geraldine Howard in second place , and in the C grade winners were Dawn George and Debra Niesler with Tricia Merefield and Carmel Dwan coming second. Congratulations to all and many thanks to everyone who came to play. The event was ably directed by Steve Murray and special thanks to Zone Committee members Rozanne and Tony who organised the day together with Noosa committee members Pat and Sue plus our team of volunteers. The winners are pictured (minus one camera shy A grade winner) [posted Sat 4-Dec-21]

Latest ABF Newsletter: Click on the link to read the latest bridge news across Australia where you can see our Noosa Club is ranked 8th in the country for the number of new players gained in 2021. What a great achievement and many thanks go to our inspiring bridge teachers Lizi French and John Gill, plus their band of helpers. A big welcome to our new members! See more... [posted Thu 2-Dec-21]

Noosa Swiss Pairs: We were pleased to host the swiss pairs event over the weekend and have 42 pairs competing over 2 grades in a very strong field. The A grade was won by Charlie Lu and Watson Zhou (pictured right) with Richard Perry and Rosemary Crowley coming second. In the B grade the winners were Debbie and Gary Gibbards ( pictured below) , runners up Penny Sykes and Lorraine Vachon. Many thanks to director Peter Busch and congress convenor Pat Lovell plus the team of helpers in the kitchen, bar and as caddies. Special thanks to our members who contributed all the delicious food that was consumed over the weekend. [posted Sat 20-Nov-21] 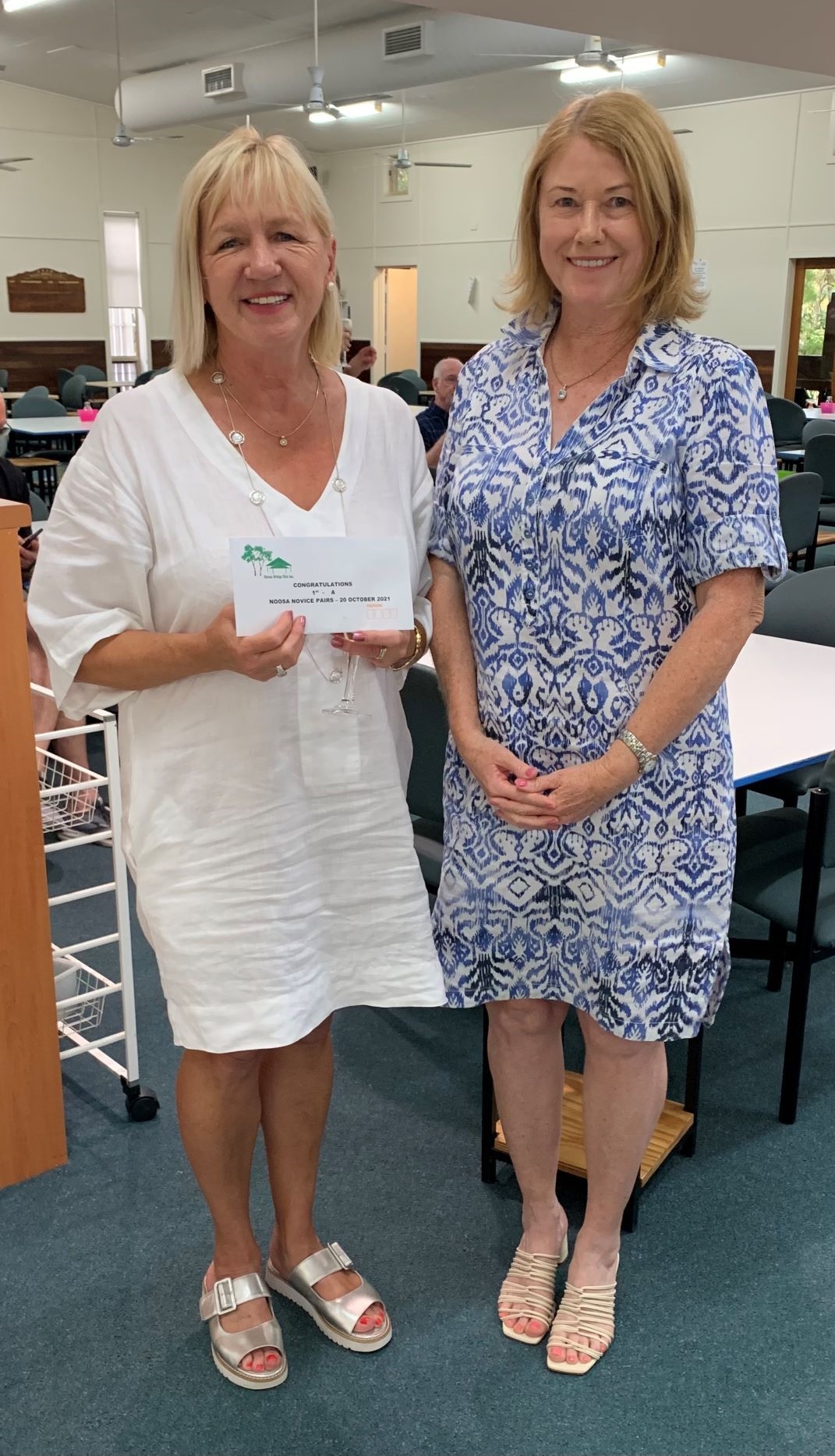 We were delighted to welcome 32 pairs in our novice congress, from Hervey Bay to Caloundra. We had two grades and winners of the A grade were Eugenie Mooney and Anna Irminger( right), with Rosemary Floquet and Jan Kinross second, Clive Brown and Simon Reeve coming third. The winners of the B grade were David Phillips and Cheryl Bell (below), Kerry Minchin and Jennifer Hurley second and Gail Gardner and Di Blount came third. Congratulations to all and special congratulations to all our very new players who entered and played in their first congress. Every pair had at least one win which was a great result. Many thanks to our director Peter, congress organiser Pat and the team of volunteers. Simon is pictured below, the night before the congress "studying".....maybe keep your eyes open next time Simon! [posted Wed 20-Oct-21] 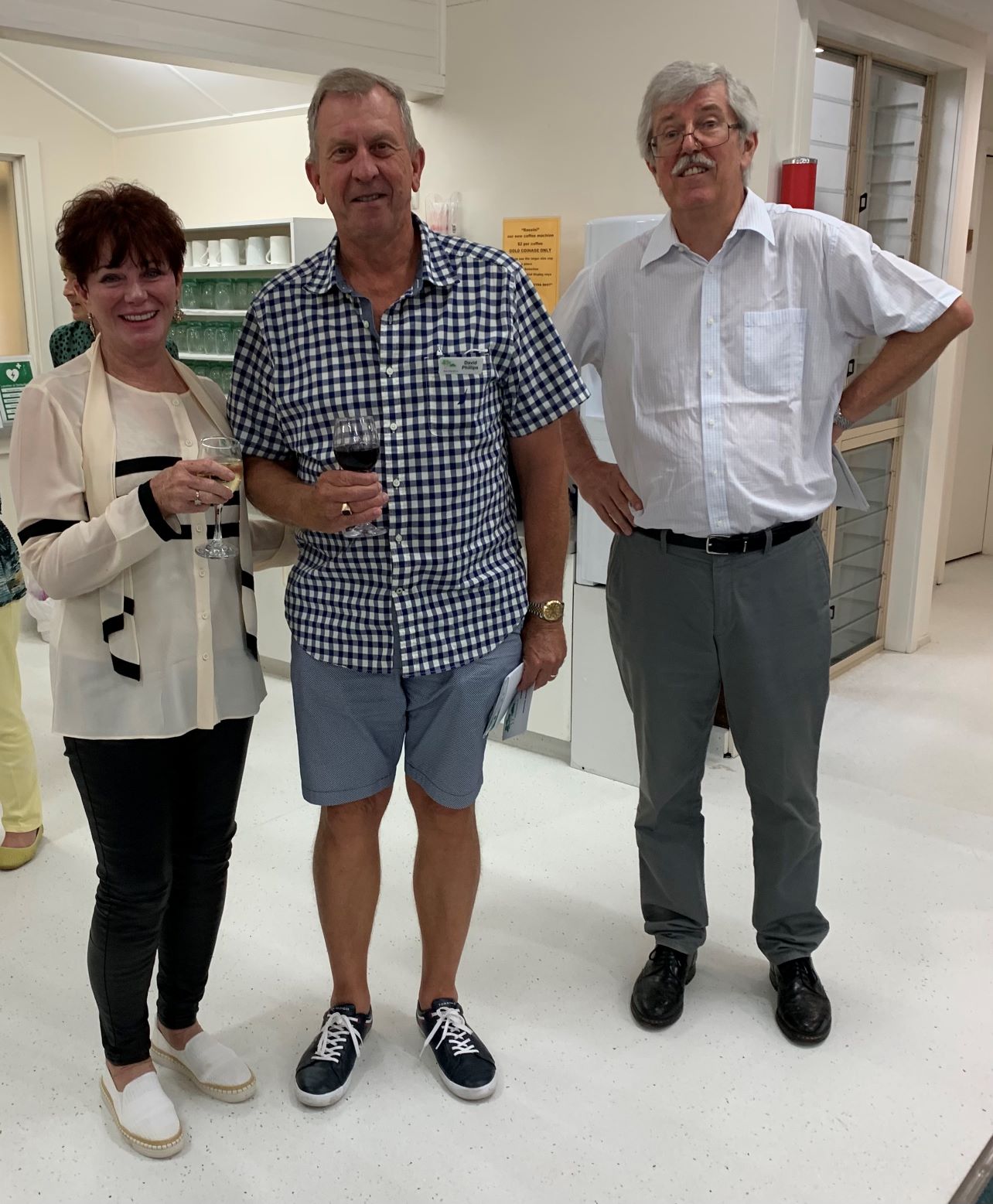 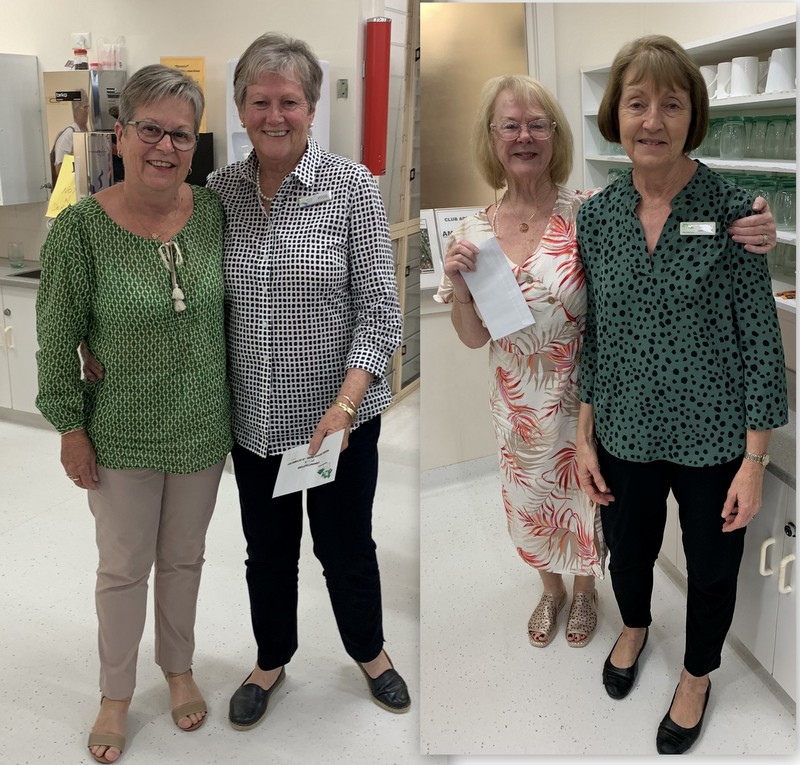 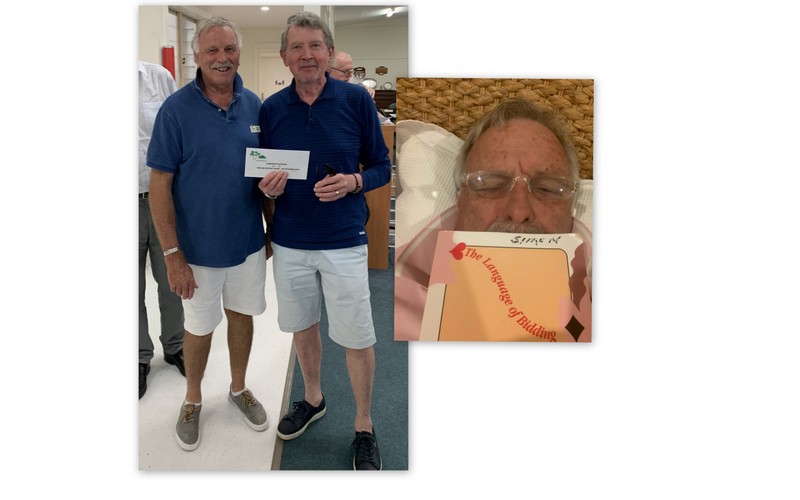 Introducing Committee Member Prue Adams: Prue is our club Providore. So Prue is the one that keeps our kitchen well stocked with essentials such as tea, coffee and milk plus organises our post congress drinks and snacks. We are all grateful for your contributions! [posted Sat 9-Oct-21] 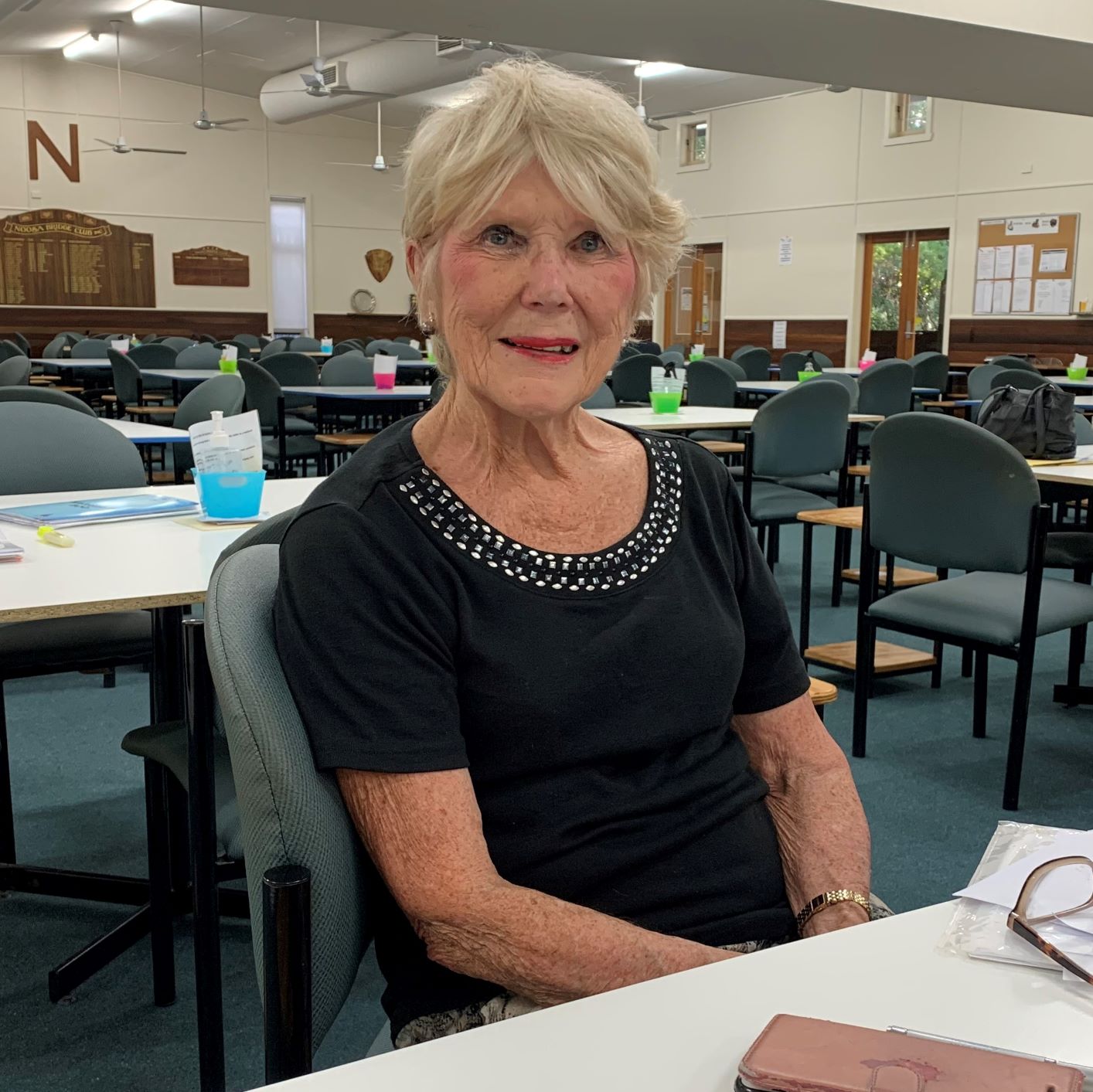 Isabel is our Members Liaison and Charity Events Coordinator and thanks to this eloquent article written by Susie Osmaston we can see what a serendipitous series of events it was that brought Isabel to our Noosa Bridge Club. Thank you Susie for another wonderful members profile. See more... [posted Sat 6-Nov-21]

Meet Committee Member John Gill: John Gill (pictured below) joined our committee in March this year but he actually first joined the Noosa Bridge Club in 1986! John is our First Aid and Safety Officer plus a member on our Finance Sub Committee and may be giving regular lessons next year. John comes from a "long line" of bridge players, learning bridge at the age of 8 years old. Both parents were keen, talented players and his sister Barbara Travis and brother Peter Gill have both represented Australia. Barbara's daughter Lauren is continuing this great tradition by coming 2nd in the world youth championships in 2013.John is pictured (right) playing in 1976 with Barbara against Omar Sharif who was touring with the Italian team at the time. [posted Mon 23-Aug-21]

Noosa Swiss Pairs Congress: Our Swiss Pairs Congress was held on Thursday June 17 with 46 pairs contending. The winners of the A grade were Patrick Bugler and Neville Francis with Chris Snook and Denise Hartwig runners up (pictured left). In the B grade Phylly and Barry De Lacy were the winners with a great result finishing 6th overall and Michael Huddart and Jean Pearce in second place in B grade also to be congratulated for finishing in 11th position overall(pictured below). Congratulations also to all our novice players who played so well finishing far above their grading. Thank you to Peter Busch for directing and to convenor Pat. Thank you also to all those who supported our congress either by playing or by volunteering their time as caddy/kitchen hands and helping in the bar. [posted Thu 17-Jun-21]

Bridge Etiquette - Role of Dummy: In the last week the committee have received a number of complaints about some members over stepping their role as Dummy. We know that bridge enjoys immense popularity because of the high standards of ethics and etiquette and at Noosa Bridge Club we follow the ABF standards of behaviour, attached is a document on the role of dummy and we would encourage all players to have a read and follow the guidelines. See more... [posted Sun 13-Jun-21]

Noosa Novice Pairs Championship 2021: As predicted the Novice Pairs championship for 2021 had an exciting finish with 6 pairs in contention at the last round. Rachel Wagner and David Richards are to be congratulated for their strong finish which saw them take second place but overall winners Clive Brown and Simon Reeve (pictured left) hung on to emerge victorious after both sessions. Congratulations to all competitors and thank you to Steve Murray for his skillful directing. [posted Mon 24-May-21]

2021 Noosa Pairs Championship: The Noosa Pairs Championship for 2021 has concluded. The event attracted 28 pairs and was run over 2 qualifying sessions and 2 final sessions. The winners of the Championship were David Harris and Tim Ridley with Maureen Jakes and Geoff Olsen finishing in 2nd place, Phillipa Barnett and Rosemary Green 3rd. The Plate winners were David Delgado and Dieter Bendt(pictured left) and runners up were Eugenie Mooney and Anna Irminger. [posted Fri 21-May-21] 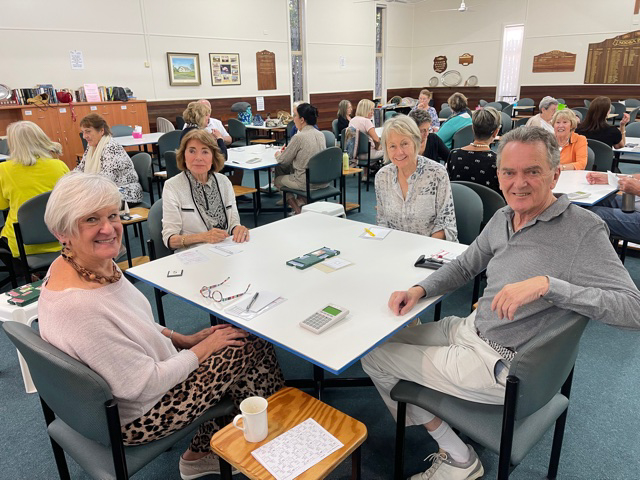 Introducing Michael Huddart: Michael is one of our new committee members and is working hard behind the scenes as head of two sub committees

(1) a finance subcommittee looking at our membership and table fees

(2) a subcommittee to improve communication to members via the website, newsletters and other publicity forums [posted Mon 10-May-21]

Barrier Reef Bridge Congress: The Barrier Reef Congress for 2021 was held in Mackay and was an enjoyable and well run event for all. Our President Adam and Dorothy Hertelendy are here reminiscing about the ''highs and lows" but still basking in the success of their 7D bid...a contract not found by anyone in the room! The Open Teams event was won by a team from the Sunshine Coast Club, congratulations to them for their impressive achievement [posted Mon 3-May-21]